Are you interested in early retirement? Today, I have a great interview with Kristy Shen, who retired with $1,000,000 at the age of 31. 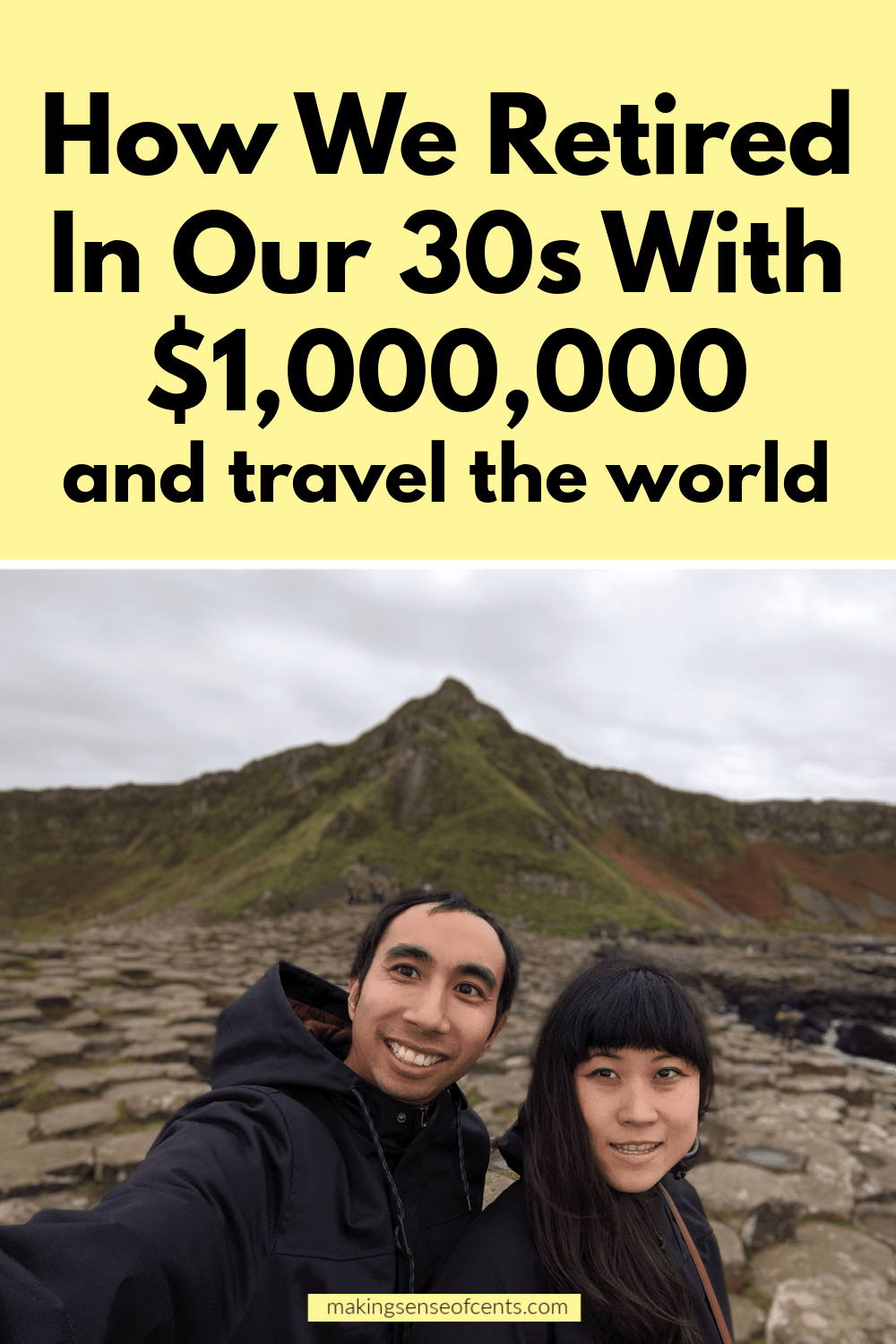 In this interview, you’ll learn:

This interview is packed full of valuable information on reaching early retirement.

1. Tell me your story. Who are you and what do you do? Can you go into detail on how much you saved for early retirement, how you chose that amount, etc.?

We are Kristy and Bryce, and we are world-travelling early retirees, having left the rat race in our early 30s back in 2015.

We were both working as computer engineers, but after almost a decade of trying to follow the “traditional career path” of buying a house and working until we’re 65 to pay it off, we realized that those old rules didn’t really work for our generation and we tried something different.

So we saved and invested our money instead, and when our portfolio hit $1,000,000, we retired and never looked back.

2. Can you explain how early retirement works? What is the 4% rule?

The 4% rule states that if you retire and start withdrawing your 4% of your portfolio, each year adjusting for inflation, you will statistically never run out of money.

It was based on something called the Trinity study that looked at historical stock market data and tried to figure out the safe amount to withdraw in retirement that won’t deplete your savings. 4% is the answer they come up with, and we used that as a target for how much we needed to have in order to retire early.

3. When did you begin saving for early retirement?

We were saving the moment we started to work, but it wasn’t initially for early retirement.

As I mentioned before, we spent the first half of our careers trying to save up to buy a house, but because we live in a high cost-of-living city (Toronto), real estate just kept getting more and more expensive even as we tried to save up for a down payment.

Eventually, we got sick of playing what we thought was a rigged game and started looking for something else to do with our money.

When we stumbled across the FIRE movement, that was our “aha” moment, because we realized that at our current trajectory we could either spend our money on a house and then spend decades trying to pay it off, or hit our FI target and retire in just 3 years.

It was a no brainer.

4. What made you want to retire early?

Besides the frustration of the real estate market, something happened at my work that really crystallized my decision to retire.

Out of the blue, one of my co-workers collapsed and nearly died at his desk. The ambulance had to be called and he needed to be rushed to the ER. He had been working 12 hour days continuously for months, and the doctors told him that his health was so bad that it was equivalent to him smoking 2 packs of cigarettes a day, despite the fact that he’d never smoked.

And the most eye-opening thing about that whole experience was that rather than making any changes to his lifestyle, he was back at work just 2 weeks later because he couldn’t afford to stop working and paying his mortgage.

That’s when I realized how messed up my priorities were.

5. Would you say that you live comfortably?

FIRE isn’t about sacrificing your happiness for money. If it were, it wouldn’t be sustainable. Instead, it’s more about being strategic and making conscious decisions in how you spend. For example, when we were working, we would still spend money taking 2 vacations a year because travel was (and still is) important to us.

On the other hand, owning a car wasn’t important, so we relied on public transportation instead. Now that we’re retired, we travel the world teaching other people how to pull off FIRE themselves.

We also discovered that travelling the world is less expensive than living in a North American major metropolitan city.

Before the pandemic, we basically lived nomadically and hopped from country to country every month, so for us travel is not so much an expense as it is just part of how we live. Since we left, we were surprised to find that travelling isn’t nearly as expensive as when we were working.

By using AirBnbs and HomeExchanges to live like a local and spending time in lower cost-of-living areas like Southeast Asia and Eastern Europe, we were able to make living nomadically cost less than living in a high cost-of-living city all year, which is about $40,000 a year for the two of us for the 6 years since retiring. Once the pandemic happened, we had to come back to Toronto for a family emergency.

We love spending money on travel, eating out, massages, and walking tours.

7. What career did you have before you retired? Do you think you have to have a high income in order to retire early?

We’re both computer engineers. I worked in finance and Bryce worked in a semiconductor company.

Having a high income definitely helps, but it’s still possible even if you don’t make that high a salary, and we’ve featured readers on our blog that are on their way to achieving financial independence as teachers, nurses, plumbers, and all sorts of other professions.

One reader even went from homeless and unemployed to $100K net worth in just 1 year by following our strategy.

With the recent popularity of remote work, more options are opening up for people to super-charge their savings by moving to a lower-cost city and baking the difference, so if anything early retirement is becoming more accessible to more people as time goes on.

8. Do you still earn an income in early retirement?

I’ve always wanted to be a writer since I was a kid, but I had to put my dreams on hold to pursue a practical career that makes money, but once we left we could focus on actually making my dream a reality.

So we created our blog Millennial-Revolution.com, and we wrote a book Quit Like a Millionaire. To our complete surprise, both projects now make money, but we continue relying on our initial $1M portfolio to fund our day-to-day living expenses and treat any extra income we earn in retirement as fun money.

9. What sacrifices or hard decisions did you have to make to reach early retirement?

It was really hard bucking what I like to call the “cult of home ownership,” not just because we lived in Toronto where everyone is obsessed with owning real estate, but also because I’m Chinese, where owning a home is such an important part of my culture that it’s considered unthinkable not to buy a house.

I fought with my parents about that so much that we basically stopped talking for the first year of my retirement.

Our relationship has improved since then, but it was really difficult for me at the time to basically be the only one doing this in my group of friends and family, but now that I did it, I now know it was the best decision I’ve ever made.

10. What do you do for health insurance in early retirement?

When you travel, medical care is not nearly as expensive as back home, so a monthly travel insurance policy really isn’t that expensive.

If you have to live in the US, you would be eligible for federal government subsidies to pay for your insurance from the Affordable Care Act (ACA) since your earned income would drop to $0 after retirement.

11. What are your long-term plans now that you are retired?

We also have the time and space to help out with family members whenever health issues come up.

12. If you were starting back at ground zero, what would you do differently?

I wouldn’t have wasted so much time chasing after a house like everyone else, but all things considered I think we actually avoided many of the mistakes that trip a lot of people up, like getting into a ton of student debt or picking the wrong career, so I can’t complain too much.

I would say, we probably should’ve started investing earlier and not sat on the sidelines after 2008, trying to save up money to buy a house.

This made us miss out on years of investment gains.

13. Lastly, what is your very best tip (or two) that you have for someone who wants to reach the same success as you?

If you want to retire early, surround yourself with people who are also on a similar life path because those people will sustain you on your journey.

When I was doing this, the FIRE community wasn’t as big (or well organized) as it is today. Now, there are FIRE meetups all over the world, so find your local group and introduce yourself. It’s also a good idea to start learning how to invest as soon as possible.

You can learn via our free, step-by-step investment workshop and our book Quit Like a Millionaire.

Are you interested in early retirement? Why or why not?